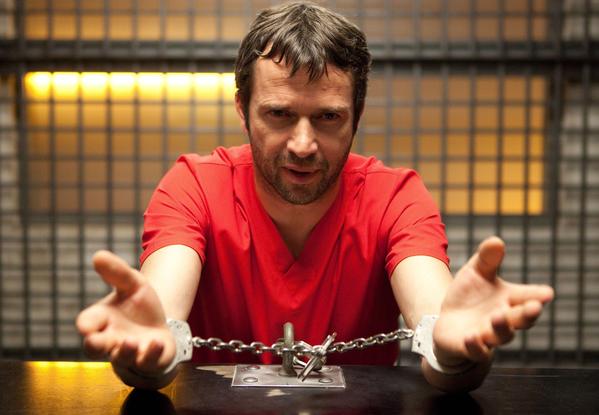 Joe Carroll in Prison in The Following

With the second episode underway of The Following, this episode was much more “filler” exposition than actual movement of the storyline. Joe Carroll made his move concerning their son, Joey Matthews, into a house with Emma Hill, Paul Torres and Jacob Wells. Tension in the house burns as the intimate relationship between Emma Hill and Jacob Wells heats up.  Their backgrounds are explored as well — as Joe Carroll introduced Emma to Jacob.  Joe Carroll made his move directly against Ryan Hardy as well.  Jordy Raines, Carroll’s prison protege, kills three sorority girls and ultimately puts Claire Matthews in the line of fire.  However, Carroll’s stated expected intentions was that Ryan Hardy kills Jordy Raines, but Jordy Raines is only incapacitated. Special agent Debra Parker, played by Annie Parisse, makes her move as well when she gives Joe Carroll an Edgar Allen Poe book through the depository.  There was also an introduction of a new follower.  Who he is remains to be seen.

This episode was much more filler as Emma and Jacob’s backgrounds were explored.  In terms of actual storyline though, there was not much movement.  Perhaps in the next episode, The Poet’s Fire, the intensity will increase once again.

One thought on “The Following: Season 1: Episode 2: Chapter 2 Review”