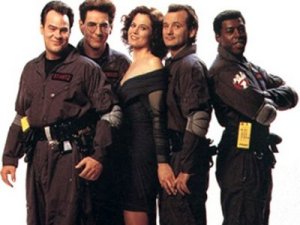 Back in the day, when movies were good and Saturday Night Live actually had a good cast, Ghostbusters made its debut in 1984.  That movie set landmarks for the cast of Ghostbusters much like The Blues Brothers before it. Bill Murray became iconic in the film as Dr. Peter Venkman long before he was shot in the head in Zombieland.  Even more Dan Akroyd was once again the star after his role in Blues Brothers. Rick Moranis career took off after this film with Honey, I Shrunk the Kids in 1989,  Sigourney Weaver, after being a heroine badass in Alien in 1979, became one of the vessels, Zuul, of badass Gozer.  And she has been keeping busy to this day, even as Ellen Ripley in the video game Alien: Isolation.

Much to our chagrin, most of us Gen-Xers are now in our 30s with jobs, wife, children and a house with very little time for movie watching  But this is one to watch.  This film is nostalgia to be certain.

Fringe Fiction definitely suggests renting or buying this film (tonight) if you haven’t seen it.  It will brighten your day.

We came, we saw, we kicked its ass!